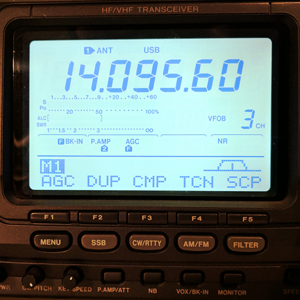 As if squirrels are not distracting enough, flying squirrels are the ultimate squirrel chase! Right? Well at least I think so. If you agree, read on.

This squirrel chase started with the May 2017 issue of QST Magazine in hand. Page 79 to be exact. There on the page was an article that became a big bright shiny fat squirrel that has become something of an obsession for me. I had to give chase!! The topic was about a ham who sent high altitude balloons (HAB) to the edge of space. With RADIOS!!! This is Buck Rodgers and Jimmy Neutron type stuff! Beyond very cool!

Needless to say, I dove into a research project, armed with just the sparse information given in the two-page article. Particularly interesting to me were comments and a picture, showing that it was possible to fly a package on a large party balloon. How can I do this? Is it really possible?

Spoiler alert: Yes, it has been done many times by others and some of the party balloons have circumnavigated the globe…..wait for it… MORE THAN ONCE! WOW!!!!   Just think of it. That happy anniversary balloon was accidentally let go by the kids before the party, could be hanging out over the Himalayas.

I have Googled a lot of information, but I have not found a single clearly detailed account of how the balloon packages were built and why they were built a certain way. Much of the information I found was old and used outdated electronics. Many of the HABs did not come close to meeting my goals below.  However, there is plenty of good information on the individual flights themselves. And from various flight logs and brief comments about the balloon construction, I pieced together my plan to fly.

In full disclosure, at the time I write this I am still assembling my first flight hardware and have not yet flown a HAB. I still have a lot to learn. However, I am confident I will fly this fall. (2017) The point of this series is to share how I am going about this project, as well as the details of the project.

My goals for project Flying Squirrel are:

A bit ambitious? Yes, but I see evidence that most of the goals above have been done by others before me. I am not really breaking new ground here, with the possible exception of goal #1. Goal #1 is a “stretch goal”. If I miss on that goal, I think it won’t miss by much.

My next article will discuss the options I have considered for the telemetry protocol and my final decisions.