“squirrel”, squirreling, the act of being suddenly and overwhelmingly distracted by something new and “shiny”… and then giving chase. 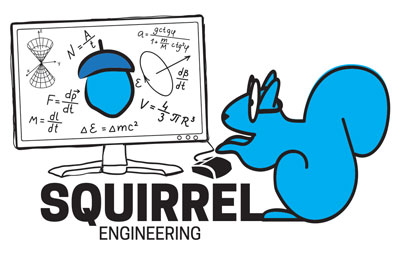 Perhaps you saw the Pixar move “Up” and recall how the friendly dog named “Dug”  who was so easily distracted by squirrels. Dug would be talking and then notice a distant, off screen Squirrel, and be completely redirected from the conversation for a while. I recall seeing that move for the first time and laughing along with the crowd at this gag throughout the movie. Like Dug, I am easily distracted by squirrels. Not the fuzzy animal kind, but rather interesting technologies and projects that randomly pop up out of a dark hole and distract me from what I was doing.  Squirrel!

Simply put a Squirrel, in the context of this blog, is a series of interesting distractions that since my partial retirement, I now have time to chase. My intention is to share my projects, in the hopes the information that is shared will be useful to others. If this blog brings wealth and fame, that will be a nice side benefit (Unlikely).

As a child I enjoyed dissembling household items, sometimes with my Mom’s permission.  I wanted to learn how things worked. Disassembly was my preferred method of learning such things. For example, I recall taking a 110V motor out of an old electric can opener, mounting it to a piece of wood and plugging it into the wall socket so I could see how it ran. I marveled at the blue sparks emitting from where the brushes touched the armature.  I found a governor that controlled the motor speed. Undaunted by the nearby electric hazards, and possible injury/death, I would push on it, with a finger, to speed up or slow the motor down. This was back in the late 1960’s, a time when children were allowed to play with exposed wiring and other dangerous objects all in the name of fun and science. Good times!  Sorry kids, it is all too dangerous now.

I have always been fascinated by radios. The mere thought of controlling or communicating through the ether amazes me still to this day. It is electric magic!  When I needed a few elective units in college and found that I could earn my units and an easy A-grade in a class on Amateur radio, I signed up. All I had to do was get my license to pass.  I did pass and got my Technician  class license,  N6GPS.  What a cool callsign I was told, in the days before the public knew much about the Global Positioning System. Sadly, I let this callsign go because the Gee, Pee and Esss sounds were hard to communicate on HF radio during the various contests I participated in. Consumer GPS was years away when I received my Advanced class license KJ6FO. I am currently still licensed under this callsign but now with the Extra class license.

Early in High School I was interested in both computers and electronics. Back in the late 1970’s computers in a high school setting was almost unheard of. In fact, I never saw the computer itself, but rather 5 terminals, only one of which was a CRT tube based display. The rest being hard copy machines including early Teletypes (TTY) machines, a modified IBM Selectric typewriter and a DEC Writer. (Basically the DEC was a dot matrix printer in the form of a table with a keyboard – Strange but cool!) When heading off to college, I was quickly discouraged, by my EE brother, to avoid electronics. So I ultimately went toward computing.  Only recently have I been able to rekindle my interests in electronic circuits and marry them to my programming skills with the widely available Arduino boards. You will see many Arduino projects in my posts, no doubt.

The projects I hope to document will be a combination of hardware and software. My goal is to show good practices, highlight the good work of others and adapt their work into mine on new and interesting projects. I am a much stronger software engineer than I am a electrical engineer, but in presenting my projects, I hope to learn more about the EE side.

Be warned, the Squirrel is a distracting creature and may cause irreparable harm to budgets, important work schedules & interpersonal relationships with significant others. Enter at your own risk and welcome!