Many GPS modules have a small backup battery that allows the GPS to save information, including settings, satellite info, time & more when power is disconnected. As these batteries age they become depleted, causing the GPS to lose the ability to save information that can greatly speed up the time to a first fix when restarting the device. Typically this battery is soldered in pace making replacement difficult. This article offers an easy solution.

Before explaining this problem and a solution, it is important to understand a little bit about how a GPS receiver acquires the GPS satellites and the different modes of satellite acquisition.

The GPS system is a constellation of 24 operating satellites orbiting Earth. These satellites are not in geosynchronous orbits so they are constantly moving across the sky as they orbit Earth.  At any given time half of the satellites are on the wrong side of the planet and more may be  otherwise hidden from view by terrain, foliage, buildings etc. To get a position fix, at least four satellites need to be visible to the GPS receiver while it gets its first fix.

A GPS receiver that is powered up for the first time or has not been powered up in a few hours or lost its saved information, due to battery backup failure, goes through a process called a “Cold Start”.

When a GPS receiver cold starts, it has no information about which satellites are visible in the sky, where it is located and what time it is, so it has to spend time searching  and acquiring the satellites by searching the available GPS frequencies for satellites.  Once a satellite is found, the GPS needs to listen to the satellite data for ephemeris data that is used to establish the receiver’s position.  To establish a position fix, the receiver needs to acquire at least four satellites and spend time listening to them before calculating its first position (Aka the first fix).

A cold start of the UBlox 7M receiver with a good view of the sky, takes at least 30 seconds to acquire the satellites and provide a first fix. Often the acquisition can take longer, up to several minutes when signals are not strong. This time is known as “Time to first fix” (TTFF).

As time progresses after the first fix, more and more satellites may be acquired and a more accurate position fix can be obtained. The more satellites that are acquired, the better the accuracy of position can be calculated.

The GPS receiver will save the ephemeris data into it’s memory. It will also maintain its time using an on board Real Time Clock (RTC). Keeping the clock and data alive requires a very small amount of power from the backup battery. If the receiver is then powered down and later restarted within a few hours, it can perform a “Hot Start” using the saved information and TTFF can take as little as a 1 second.  A hot started GPS receiver can almost pick up where it left off at power down and quickly reacquire satellites that took minutes to initially acquire during a cold start. The hot start is a very significant time saver for the GPS.

The problem caused by a backup battery failure.

As you can now see the backup battery, when in good condition, can greatly improve the TTFF and accuracy of early positions fixes after power up.  If your device keeps the GPS powered up all the time and can afford a long time to acquire an accurate position after power up, battery failure may not be a concern.

However devices, with limited power that only need occasional position fixes can save a lot of power consumption by turning the GPS off and then hot starting when needed. The Flying Squirrel balloons are one such example device. When the backup battery fails, each start will be a cold start, consuming much more power while the fix fix is obtained..

The solution to a dead backup battery.

Because a battery powered device like a Flying Squirrel already has a voltage source (i.e. the main battery) it can easily be used in place of the dead backup battery.

For this solution to work your device needs to be able to switch the Vcc (Voltage) input to the GPS receiver on/off while leaving the ground connection connected.  FS2 and FS3 balloons, could not do this without a change in the circuit design for the GPS power switch because they turned the GPS on/off by switching the the ground connection instead of the Vcc. 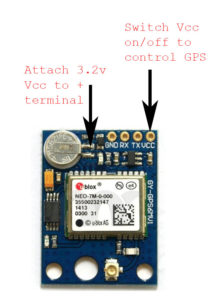 The solution is to run a second Vcc line to the + connection of the battery backup. This Vcc  line will only draw very small amounts of power while the GPS is off. When the GPS is needed, the main Vcc to the GPS can be switched on and it will start with a hot start.

On the Ubox 7M GPS the required voltage for the battery backup is 2v (aprox) to 3.6 volts. This is within the operating range of the battery used by Flying Squirrels, so it is a very easy to connect the main Vcc (Battery +) to the battery pads on the GPS printed circuit board by soldering a a single wire.

To switch the GPS Vcc on/off a PNP transistor and a resistor can be used as a switch. The control line to the circuit needs to be logic High to turn the GPS off and Logic Low (0V) to power the GPS on.

Future versions of Flying Squirrels will use a 2N3905 PNP transistor circuit to switch the GPS Vcc on/off. This will leave the ground always connected so the battery backup circuit can complete the flow of current.

In my tests this allowed my GPS indoor, with poor signal conditions, to hot start every time the GPS was power after the initial cold start.  It is important to know that on the the cold start you should let the GPS run for a minute or more to collect the needed data and acquire more satellites for a subsequent hot start.