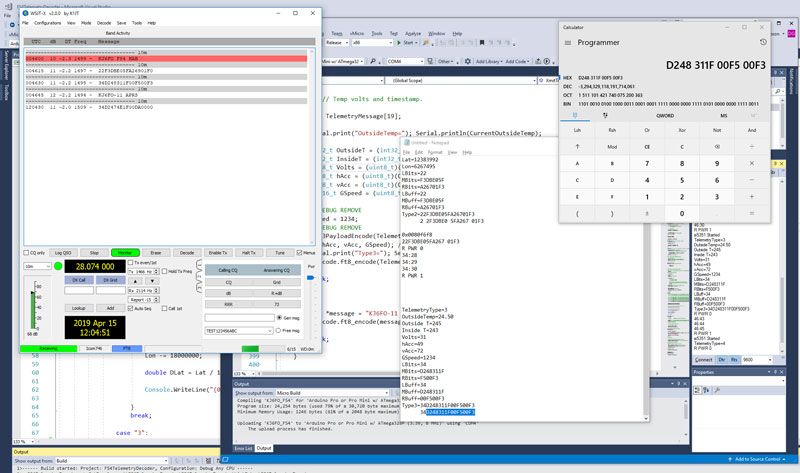 It was a busy winter and spring around Squirrel Engineering HQ, but despite a lot of non-squirrel projects a lot has been happening behind the scenes on the next HAB project, Flying Squirrel #4 (FS4) This article will bring you up to date on what has been going on.

After the FS3 flight and recovery of the payload, several issues needed to be investigated and solutions found for them.

1. Keeping the payload warm. Its cold up there, like really really cold!

Had the mission not prematurely ended due to the failed antenna wire supporting the payload, it is clear the temperatures would continue to fall below the point where the battery and electronic components would freeze up and fail.  Most of the electronic parts are rated to -20C. FS3 would have reached that point within another hour of flight.

A solution to keep our FS4 squirrel warm is needed.

2. Learning from a failure. About that wire thing.

A mission failure is an opportunity to learn something new. After FS3 was recovered, it is clear why the payload suddenly stopped transmitting. The antenna wire used to connect the payload to the balloon broke.  The wire was a deliberately small gauge wire to save on weight and to improve safety should the wire become tangled up on something back on the ground.  The problem was the driven element of the dipole was the “top” end of the dipole. When the wire failed at the point where this wire connected to the payload, the driven side of antenna was cut-off. FS3 continued to function but was mute without this wire.

A stronger wire is needed for FS4. Also, the arrangement of the driven element needs to be the lower part of the dipole which is not under stress and would continue to function even if the top wire breaks. Both of these problems are easily solved.

FS3 used a combination of FSQ and WSPR protocols. Both worked great! But its time to move on to something new. FT8 is a digital mode that is widely popular for making quick QSOs. The mode has much love and hate in the ham community for a number of reasons. However, the FT8 protocol was recently expanded to include a new “Telemetry mode” which has some very useful features for the FS4 mission to explore. FT8 was considered for the FS3 flight, but the code in a suitable language was not easily available until recently.

The FSQCall software has some issues. It is not a popular mode so the software is not widely installed. The software also crashes on occasion, making loss of data a potential problem. FSQ data reception is also not error free. The WSJT-X software that supports the FT8 solves all of these problems.

WSPR exceeded all expectations. FS3 was heard from Hawaii to New York. But the software for WSPR was hogging up a lot of precious memory on the Arduino Pro mini. It had to go to make room for more important functions. WSPR may return on future flight when a suitable Micro controller can be used.

Current Status of the project.

Most of the research is complete and software development is at a Beata level of completion. In addition to implementing the new FT8 Telemetry protocol, a companion Ground station (Ground Squirrel) Telemetry decoder has been developed which will show progress of the flight on screen and prepare data files for post flight analysis.

The one remaining research topic is how to keep FS4 warm at high altitude and remain lightweight. This research will become complete after the initial flight hardware is built and can be tested under low temperature conditions.

The hardware design is largely complete, pending the outcome of the heat research.  FS4 electronics will use a very similar design as the FS3 payload.

FS4 will operate on the 10meter ham band. This will save weight on the antenna because it will be half the length of the FS3 antenna. The 10m band, during the solar minimum conditions we are experiencing, has a very low noise floor and experiences little QRM (Interference from other stations).  This will improve the signal to noise ration and will let us hear the balloon from further away.  The 10m frequency also makes air core coils for the low pass filter practical and this will save weight over the iron toroid core coils used previously. Any weight savings will help FS4 carry a larger/heavier battery if needed for heating.

Finally when will FS4 launch?

An exact date is not set and won’t be set until all development is 100% complete. But the target date is sometime in June. Stay tuned.